Villa Taverna is twelfth century rectory which became the holiday residence of the Counts Taverna from 1525. The first articles of the Villa di Canonica are contained in the Dialogue “La Villa”, published in 1559 by Bartolomeo Taegio.

“Here comes the wise and great Taverna … The airy Villa of the famous Canonica for whose proximity make proud the Lambro and Monza. The surroundings so cheerful and joyful and marvelous … With a happy and pleasant hill whose vagueness is such that makes me surprise … The shrubs, the outside, the herbes, the smells, the well-measured paths: such is the pleasure of this most agreeable place. ” 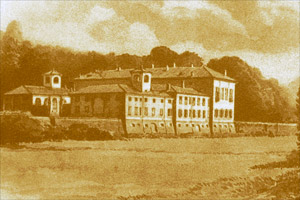 The first memories of this noble family from Milan go back to the early twelfth century when an endowment was made to the monastery of San Vito by Arderico Taverna (April 24, 1104) attesting to the existence of possessions of the family on the site. In the twelfth century the family, who resided in Milan, had close contacts with the Basilica of Sant ‘Ambrogio, traceable not only by a donation of land to the Church by Ambrogio Taverna (1176) but also by the so called “Taverna frescoes”(dated 1210-1230ca), bearing the portrait of Buonamico Taverna, buried in Sant ‘Ambrogio, in attitude of the benfactor. Towards the end of the fifteenth century, the Taverna acquired a prominent role in Milan, starting with the foundation of the “Taverna Schools”, one of the first free public schools in Milan. They were located in a building behind the Church of St. Sepulchre and later transferred to via Santa Maria Fulcorina following their demolition in the seventeenth century to make way for the Biblioteca Ambrosiana. A watershed moment for the family, albeit in the midst of one of the most dramatic moments of the Franco-Spanish war, was with Francesco Taverna (1480-1560); a great chancellor of the duchy of Milan and especially prominent negotiator of the most important peace treaties (between the Pope, the King of France, England, Venice and Florence as well as the peace treaty between the Republic of Venice, the Duchy of Milan and the Emperor Charles V). It is he who in 1525 acquired the Villa that from then on was owned and inhabited by the Taverna family. During the eighteenth and nineteenth century, among its leading figures, special mention must be made of Francesco Taverna (1758-1827) the State Councilor and to his son Paolo, founder of the Pius Institute for the Deaf-Mute destitutes of the Countryside that still exists today. Alongside the many episodes of historical importance that have marked the history of the family, deserving especial remembrance is the committed and active engagement of the Taverna family from the Napoleonic republics all throughout the Risorgimento in favour of the independence and unification of Italy. Rinaldo Taverna moved to Rome after Porta Pia alongside the King of Italy, for whom he held important public offices. 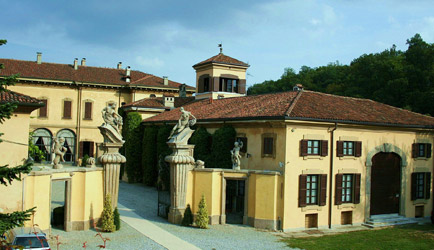 Villa Taverna, situated in Canonica Lambro (close to Monza) is located in a slightly raised position  at a short distance from the banks of the Lambro river. Its architectural structure, shaped as a “U”, is characterized by a two-storey main front, with two lower wings that gracefully enclose the noble court. The entrance to the courtyard features a grand facade arranged as a concaved semicircle, with a gate at its center, and framed by two pillars supporting large statues annexed to two complementary statues of lesser magnitude placed over the secondary gates. The 16th century villa had its first major renovation in the 17th century, mostly visible inside, whilst the external appearance is uniform in design according to a single project and eighteenth century restructuring. The triple arched entrance hall leads to the large central hall from which you can access the Italian garden, which preserves intact its original sixteenth century landscaped layout in a beautiful position elevated above the slope leading to the Lambro. 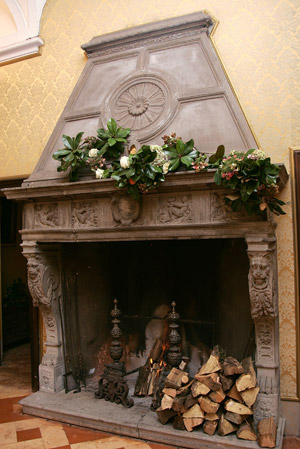 Vestiges of the earliest phase of the villa`s construction are the splendid series of sixteenth century chimneys. It is believed they were not originally created for the villa, but were taken from other residences of the family and have been placed in the halls with a successive addition of mantlepieces during the seventeenth century. It is worth taking a moment to describe at least two of the four chimneys located on the ground floor: the one in the central hall presents two verticle lion masked telamons parting from a protruding hearth in support of a magestic mantlepiece. The latter has at its center the ancient emblem of the Taverna family, a simple array of diagonal stripes with the absence of the quartered silver dog later on added with imperial privilege by the grand chancellor Francesco Taverna in 1536. The frieze of the roman doric ordered mantlepiece, consists of 4 metopes alternating with triglyphs, 2 of which are a specular image of the other two. The external metopes are an allegory of a succesfull harvest, whilst the center pair are an allegory of the abundance of fruits which nature has to offer. The iconographic end of these agriculturally characterized reliefs is, on one hand, to emphasize the land being made productive by the hard work of human labour, and on the other the generosity of nature that spontaneously grows the fruits on the trees. At the extremeties are also found the figure of two sirens. The elegantly refined sculptures for the telamones suggest the dating to be around the third decade of the sixteenth century. The chimney in the first room left of the central hall (fig) can also be dated to the mid-sixteenth century. Supported by two caryatids, the upper frieze presents sketches of “candlesticks” with fantastic animals, whilst the metopes show trophies as their main theme, where classic loricae alternates with sixteenth century helmets, shields and amphorae, all creatively hung from rich ribbons, according to the antiquarian taste that spread in Milan during the first half of the sixteenth century thanks to the treatises of Cesare Cesariano. This repertoire of bellic elements adds to the historic value and symbolically recounts the “deeds” of the great family. The coat of arms of the Taverna family after the imperial modification, located at the center of the mantelpiece, is represented, in two of its quadrants by a dog gazing at a star of eight rays. 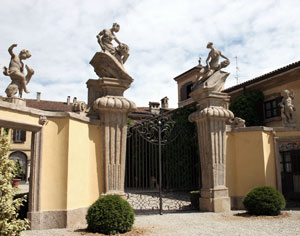 Of special note to the whole complex are the eighteenth century rococo statues, whose elegant grace frames the external entrance to the villa. The statue furthest to the left is an allegory of Autumn (fig), represented by a female figure holding a cornucopia filled with grapes, whose fruits are also woven into her hair. To the right an Allegory of Spring (fig),  with the scattering of flowers from a basket full of flowers. The statues can also be read as depictions of abundance (the cornucopia) in an agricultural sense, as befits a country house, and of spontaneous natural wealth (flowers) combined with the work of men (harvest). High quality refinement to the naturalistic details can be seen in the minute work done for the draperies and harmonic conception, which places the figures in almost musical dialogue with the curved gable below. Of especially iconographic significance are also the two side figures: to the right a boy with a snake, symbolizing the imminent dangers of the outside, and to the left a boy with a dog, long since custodian and protector of men, precisely the function performed by the gate. 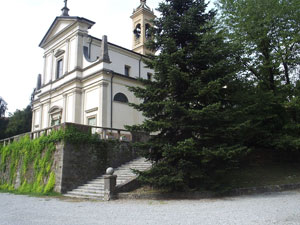 Adjacent to the Villa, stands a parish dedicated to Our Lady of the Snow. Originally dating to the sixteenth century and later restored in the eighteenth century, it was built by the Taverna family and donated to the Curia last century. The facade has a particularly linear aspect presenting curvilinear vaults and a triangular shaped gable. The interior is finely preserved with the beautiful marble statue of Our Lady of the Snow, originaly located on the walls of Villa Taverna then relocated following a series of miraculous events. The church is decorated with frescoes by Gian Battista Zalli